What's in a Name?

Turns out, a lot. In 1900, Karl Zeidler Sr. lent his name to a small floral shop he began operating out of his Evansville basement, armed only with a love of flowers and the willingness to work hard. And work hard he did. With the help of his wife, Mary, Karl's quick success meant he could move his modest business from the basement to a proper brick-and-mortar building - and a 2,000 sq ft one at that. Later, he purchased 13 acres of land along Fulton Avenue; he knew his onetime basement business would need it.

When Karl's son Fred took over in 1928, Alvin "Al" Dauble's family was just setting up their own shop on Garfield Street. While Fred was busy increasing production, expanding the greenhouses and hiring more employees, Al was learning the ropes of the floral business. When Fred began wholesaling products to local shops, Al Dauble's was one of them. Fred quickly became a kind of mentor to Al, so in 1958, when the Dauble brothers bought Zeidler's, there was no one better prepared for the job.

Under Al's direction, Zeidler's flourished through the 1960s and 70s, adding new locations and dozens more employees to the family. The greenhouse space swelled to 100,000 square feet, the Fulton shop added 8,000 more to its footprint, and the wholesale division had taken off. It was clear that Dauble's vision, combined with his leadership and dedication, had earned Zeidler's a lot of success, including a Top 100 Florist award from FTD in 1975 (there would be 30 more after that).

Though our current President, Blake Mobley, began his relationship with Lori Dauble, the youngest of Al's three children in 1980, he didn't end up joining the company until 1989. It was then that Blake accepted Al's offer to join Zeidler's and run the retail division. Through the years the business continued to grow under Blake and Lori's leadership and guidance. The pursuit of perfection led to many changes and improvements in operations, communications, technology, personnel and facilities.

Today, Zeidler's Flowers continues Karl and Al's legacy, with the next generation of Daubles at the helm. We're one of the largest and most diverse floral businesses in the country, but we haven't forgotten that we blossomed from the basement. Our first love is flowers, and it always will be. 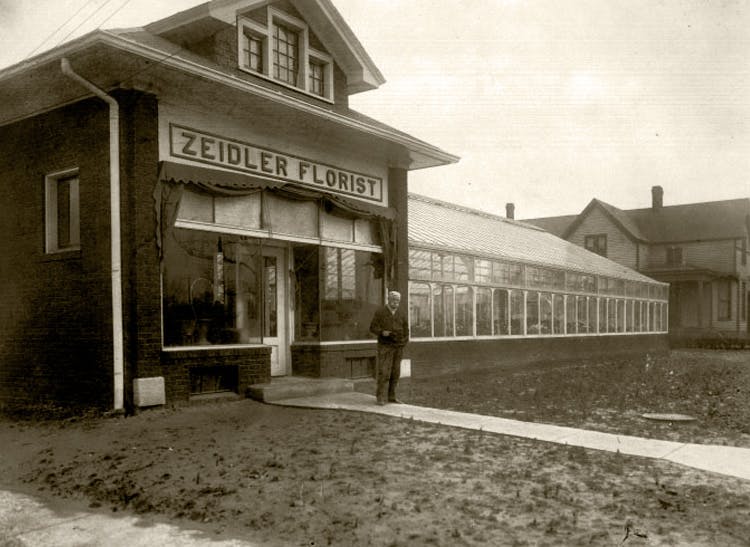 Karl Zeidler stands outside the floral shop and greenhouse that bears his name, circa 1900 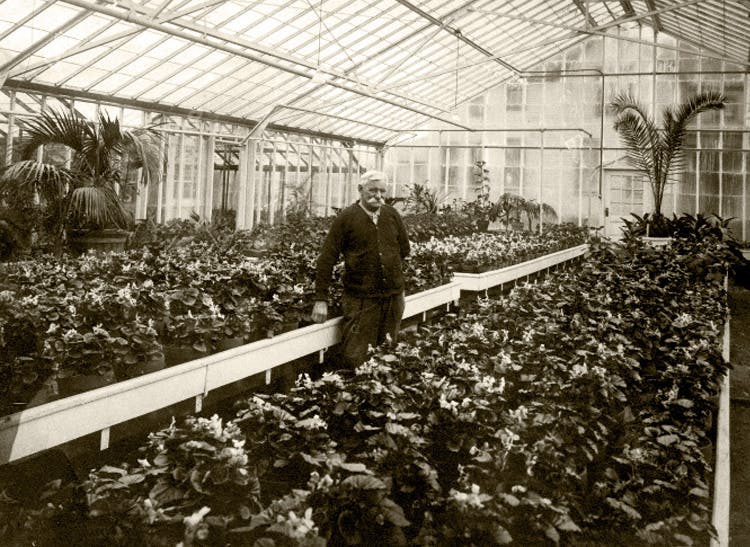 Inside the greenhouse with our founder, some time around the turn of the century 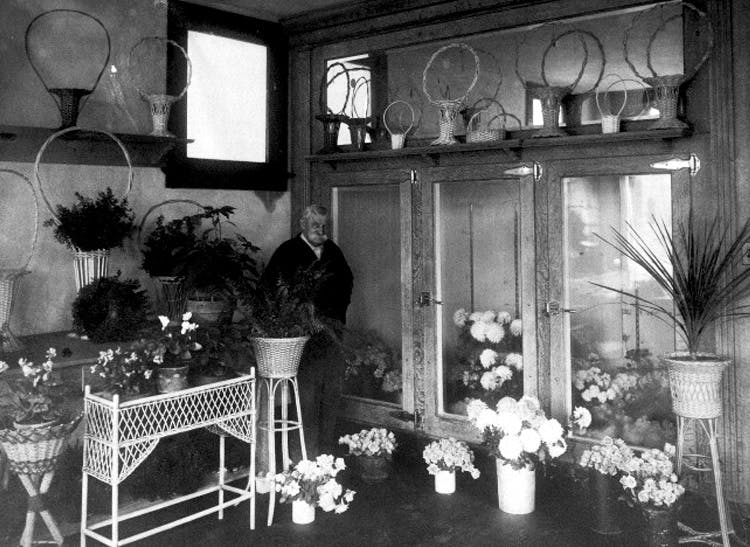 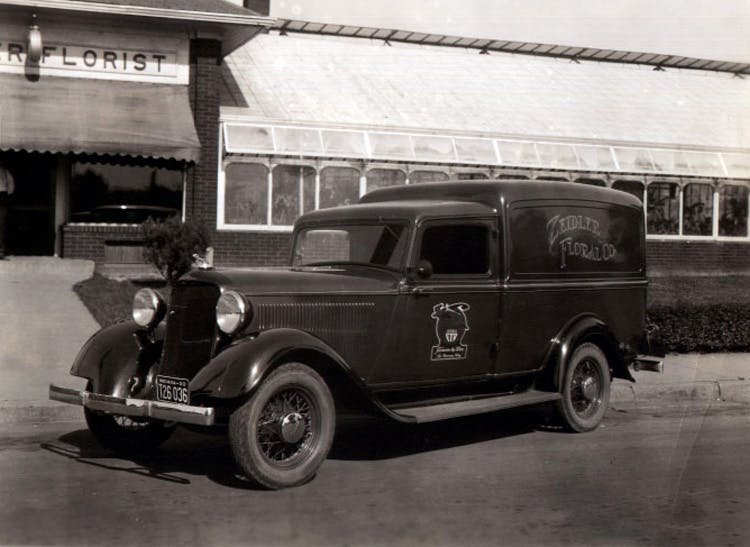 An early delivery vehicle, emblazoned with the Zeidler name, parks outside our storefront 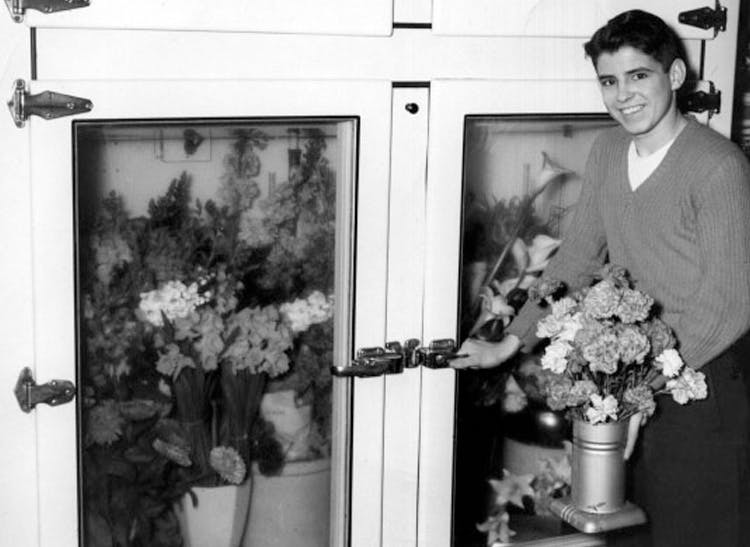 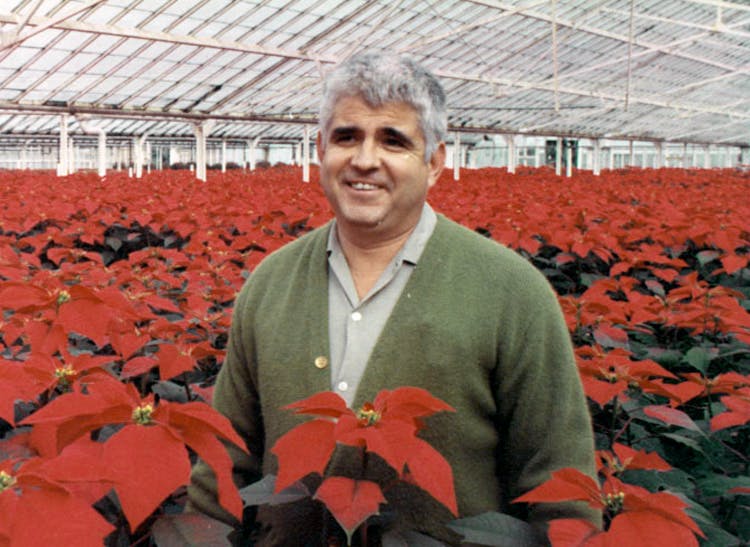 Al poses amid a field of poinsettias, circa 1980